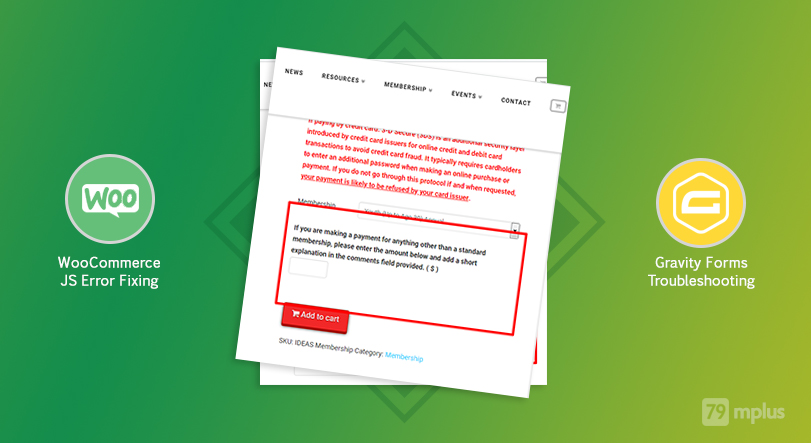 Suddenly, an update to WooCommerce to latest version 3.3.3 surprisingly broke the system. After the update, it was raising a mysterious cart-fragments.js error and the GForm fields disappeared from the registration page.

That’s not all. There were some required fields, and as the fields could not be filled, due to being invisible, it was stopping the user from adding it to cart – causing a total broken system.

We dived into the problem right after getting the feedback. After a bit of looking, we found out that others faced the similar issue. The problem was fixed when WooCommerce was downgraded to 3.2.6. Thought of the moment was that the issue was with WooCommerce, so we went on to post a bug to WooCommerce about the issue. Good folks from there suggested there must be something else that may be causing this, because other plugins or some unknown code may influence how cart-fragments work.

To find a solution, first we changed to Storefront theme, but no use. So the problem was not there on the theme. Then we ran an extensive trial and error test and at the end we found out that an unsupported and old plugin named “Woocommerce Poor Guys Swiss Knife” was responsible for the issue. We Deactivated the plugin and the issue was gone.

To find a solution, first we changed to Storefront theme, but no use. ... at the end we found out that an unsupported and old plugin named “Woocommerce Poor Guys Swiss Knife” was responsible for the issue. ... Click To Tweet

If you face the error, we would suggest you do the following:

The solution was easy but we had to do some grinding to get to the solution.
But we still love it when it gets solved! Nothing like a solved mystery!

Adnan is in love with WordPress for 6+ years, working on various themes, plugins and frontend stuff. Besides being a Code Wrangler, he likes writing, photography and creative work of art.